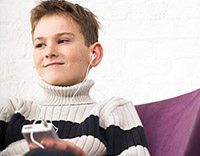 The new standards will require small technical changes to iPods and other MP3 devices so they play at a safe volume by default. There will also be a health warning so consumers who choose to override the default settings know the risks.

"The evidence is that particularly young people, who are listening to music at high volumes sometimes for hours each week, have no idea they can be putting their hearing at risk," European Union Consumer Affairs Commissioner Meglena Kuneva told a news conference.

The Commission plans to adopt the standards as the norm for new products after a 24-month consultation procedure with scientists, industry and consumers.

An EU scientific body raised the health alarm in January, warning that up to 10 million young people are in danger of damaging their hearing by playing their MP3 players too loud.

Listening to personal music devices at high volumes for long periods of time can cause hearing loss and tinnitus, a ringing sensation in the ears, the EU Scientific Committee on Emerging and Newly Identified Health Risks said. There is currently no cure for hearing loss or tinnitus, the committee noted in its report.

Kuneva said 5-10 % of MP3 users risk permanent hearing loss if they listen to a music player at high volume for more than 1 hour per day, each week over at least 5 years.

"It can take years for the hearing damage to show, and then it is simply too late," she added.

The Commission said it was estimated that about 50 to 100 million people may be listening to portable music players on a daily basis. Reported by Reuters.