A customary loudspeaker announcement reminds theatergoers to turn off their phones. Unfortunately, not everyone is ready to obey. And still there are people who demands the order, as for example, Hugh Jackman. 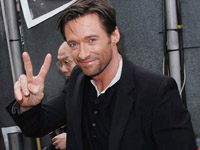 Recently when a cell phone call interrupted a preview performance of "A Steady Rain," the Broadway play that stars Jackman and Daniel Craig, the former could not ignore it.

An amateur video shows Jackman breaking character to tell the owner of the ringing cell phone, "You want to get that?" as the audience erupts in cheers. As the ringing persists, Jackman pleads: "Come on, just turn it off." He then paces the stage of the Gerald Schoenfeld Theatre, waits about a minute for the ringing to stop and the play resumes.

The interruption occurred during an intense moment in the play, when Jackman's character, a Chicago policeman, reveals haunting memories.

Since the incident, ushers who seat patrons and pass out playbills at Schoenfeld are also instructing patrons to silence their phones.

"A Steady Rain," a taut drama about the relationship between two policemen, opens Tuesday for a limited engagement through Dec. 6. The play by Keith Huff already has proven to be a potent box-office winner, playing to capacity audiences since it began previews on Sept. 10.

Jackman won a Tony Award in 2004 for his performance as Peter Allen in the musical "The Boy from Oz." Craig, filmdom's latest James Bond, is making his Broadway debut. Reported by The Associated Press.