Freddy Krueger is Back To Kill

It may not come out until April, but Freddy Krueger fans can get their fix of the "A Nightmare on Elm Street" remake with a just-released teaser. 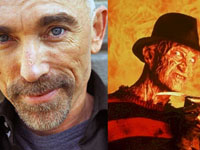 Freddy Krueger is Back To Kill

Already now anyone can find a  trailer of the new version of ever scary movie,  the ad is thought by many as most blood curdling trailer of the year.

This Krueger, played by Jackie Earle Haley of "Little Children," has a face that's even more disfigured, a blade-laden glove that's sharper and a back story that's bound to draw more sympathy than Freddy ever did in the 1984 original.

Krueger's mug may be new and improved, but there will be some familiar faces in this remake.

Kellan Lutz of "Twilight" fame has a spot on Elm St., as does Katie Cassidy, one of the stars of the new "Melrose Place."

There will be classic scenes, too, some lifted wholesale from the original.

Even if they're not into Krueger's new look, fans are sure to be terrified if the movie lives up to this scary trailer. Reported by New York Daily News.