"Surrogates" resembles Crichton's "Looker" (in which sinister surgery further "perfects" dishy advertising models), one of the more risible misfires of 1981. However, the new movie obviously wants to reap some of the praise and permanent fandom accorded "Blade Runner" and "RoboCop". 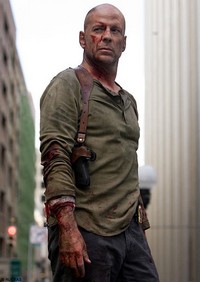 We get two Bruce Willises here. The real one, a cop, is the standard weathered Bruce, bald again and still wearing what looks like used face stubble. His surrogate, though, has wavy bottle-colored hair and the porcelain skin of a hairdresser.

The movie's tone is rarely satirical and is more concerned with political intrigue involving pockets of anti-surrogate protesters who enjoy bludgeoning the machines. They're led by Ving Rhames, sporting the hair weave you'd expect of someone calling himself "The Prophet," USA Today reports.

It was also reported, "Surrogates" is a movie about human robots that appears to have been made by human robots. Just as the dystopian world the movie portrays is arid and specious, the movie itself is a mechanical sci-fi'er absent of logic or emotions. It functions as an expensive place-filler on the Disney release schedule and, as such, will be welcomed by only the least discriminating thriller fans after it opens Friday.

Bruce Willis and Radha Mitchell play FBI agents in a society in which no one is whom or what he seems. The future world imagined here is one where humans cocoon at home, connected to remote-control devices, while idealized, synthetic surrogates they control via brain impulses march daily into society to engage in any sort of risky behavior without possibility of injury or repercussion. Every "unit" looks like it stepped out of the pages of "InStyle," Reuters reports.

News agencies also report, Bruce Willis does his best to rough up the movie, but it's a lost cause; Greer is a gloomy, subdued version of the typical Willis action hero, saddled with a distant wife (Rosamund Pike), a dead son and a melancholy that Willis struggles to convey. Director Jonathan Mostow's action set pieces, poorly cut and filled with B-grade special effects, don't help. Even the scene where Greer's boss takes away Greer's badge and gun -- a scene played by so many chiefs in so many cop movies with vein-popping histrionics -- is, in "Surrogates," a dull affair.

The movie only comes alive in a few throwaway moments, when its screenwriters back off their ponderous plot and let a few big ideas creep in. As Greer and an Army officer discuss the murder case, we see behind them hundreds of soldiers hooked up to combat surrogates in a faraway field of battle. When one of the robots is destroyed, the soldier is given a new surrogate, a new life -- a queasy vision of war as a video game that seems, in an age of unmanned drones and networked combat, not so far away at all, The Washington Post reports.