"Modern Family", a new ABC’s domestic sitcom, is said to be not just for cheer but also for outright jubilation. The writers and producers of the sitcom, premiering Wednesday at 9 p.m. on ABC, have found sharp new angles for tales of the great American family, and they juxtapose them in smart, savory ways. 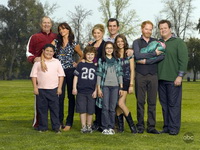 Superficially the story of three couples told as if all were the subjects of a reality show, "Modern Family" reveals the bold extent of its modernity about halfway through the premiere; the households are connected in an intriguing and promising way that should not be revealed in advance, even though it's essential to the premise. Confused? Well of course! But it's worth tuning in just to find out who's whose, and to discover there's much more than that to appreciate, The Washington Post reports.

News agencies also report, the premiere introduces viewers to three families. Ty Burrell and Julie Bowen play the traditional mom and dad. Burrell takes the role of TV clueless dad up a notch by deluding himself into thinking he is hip and cool. Bowen portrays the mom as a former wild child who now worries her kids will follow her former rebellious path. Their three kids -- a high school cutie, a precocious daughter and a klutzy son, all familiar TV types -- turn everyday parenting challenges into comedic gold.

The second family, a gay couple played by Jesse Tyler Ferguson and Eric Stonestreet, become adoptive parents in the opener. Ferguson's comedy skills were apparent on CBS' "The Class," then obscured in Fox's "Do Not Disturb." Here, and especially opposite Stonestreet, Ferguson realizes his potential.

The third family is a May-December combination played by Ed O'Neill and Sofia Vergara. O'Neill's Al Bundy is one of TV's most unforgettable characters, but this role will let viewers see him in a new light. At the same time, Vergara's character confirms that the former calendar pinup girl can be a formidable comedy actress, something her previous series suggested but didn't conclusively demonstrate. In this show, she has a stocky young son from a previous marriage, Reuters reports

It was also reported, the most impressive thing is that the producers find time to let each character be an idiot, but also show legitimate family fondness.

Much of what we're likely to see in "Modern Family" we've seen before: nervous mom vs. hormonal teenager; emotional Latina and buttoned-up Yanqui; gay couple that's a little hypersensitive. And so on.