The past weekend was not at all restful for U.S. TV actors and their fans. They could hardly control their emotions watching and participating in 61 Emmy Awards Ceremony. 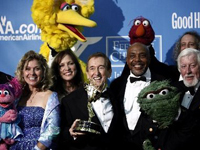 Reporting from Los Angeles and New York - The surprises came in the form of new and old at the 61st Primetime Emmys on Sunday as dark horses such as Toni Collette and Kristin Chenoweth beat out the favored winners while veteran actors took home nearly every other acting award.

And though it was hardly a shock that AMC's "Mad Men" won for the second year in a row for drama series and "30 Rock" won for the third consecutive year for comedy series, repeat wins in drama categories by Glenn Close for lead actress for FX's "Damages" and Bryan Cranston for AMC's "Breaking Bad" were not entirely expected.

Including the Creative Arts Emmys handed out last week, the big winners were PBS' "Little Dorrit," with seven awards; HBO's "Grey Gardens," which took six; and NBC's "30 Rock," which won five. But a wide variety of programs were represented: In all, the 28 Emmys handed out Sunday went to 20 shows.

Hosted by a wry Neil Patrick Harris, the three-hour-long program was spiked with jokes about the diminishing influence of broadcast television and old-fashioned, crowd-pleasing musical numbers.

NBC's "30 Rock" had gone into the awards show with 22 nominations, more than any other series. But as the night went on, it won only a handful, including Matt Hubbard for writing and Alec Baldwin, who won for lead actor in a comedy for the second year in a row. The win for comedy series made it all go down a bit easier.

The win for "30 Rock" was no doubt a disappointment for "Family Guy" fans: The bawdy Fox show was the first animated series to be nominated in that category since "The Flintstones" 48 years ago.

Brendan Gleeson, 54, won for actor in a miniseries or movie for HBO's "Into the Storm," in which he played Winston Churchill. Supporting actress went to Shohreh Aghdashloo, 57, for the pay channel's "House of Saddam."

One of the biggest surprises came when Collette beat out Fey, among others, for lead actress in a comedy series for Showtime's "United States of Tara."

Harris lost to Jon Cryer for supporting actor in a comedy series -- the first acting award for the long-running sitcom "Two and a Half Men" and a bit of an upset, considering "30 Rock's" Tracy Morgan and Jack McBrayer as well as Rainn Wilson ("The Office") and Kevin Dillon ("Entourage") were all in the field.

But Harris emerged the winner of the night nonetheless. After last year's critically panned show, in which all five nominees in the reality-show hosting category took a turn at emceeing, Harris' self-deprecating humor and charm drew a slew of accolades. "Better than last year, isn't it, though?" comedian Ricky Gervais said with a grin.

Other highlights: Michael Emerson won supporting actor in a drama series for ABC's "Lost," and Cherry Jones won for supporting actress for playing the female president of the United States on Fox's "24."

And Matthew Weiner and Kater Gordon won for writing in a drama series for "Mad Men."

In the variety categories, Comedy Central's "The Daily Show With Jon Stewart" won for variety, music or comedy series as well as for writing. Bruce Gowers won for directing Fox's "American Idol," and the Hugh Jackman opening number for the Academy Awards in February won for original music and lyrics.

Like many of the winners in drama and comedy, the recipients in reality programming looked awfully familiar -- in some way, a surprise in itself.