While hip-hop artist Kenye West apologized for his bad behavior at VMA show, his name has been a top trending topic on Twitter ever since the incident itself, The Washigton Post reports 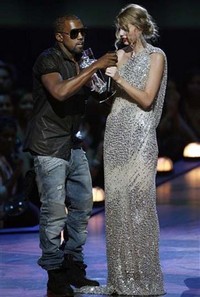 In the meantime, because the 2009 MTV Video Music Awards were the first of the Twitter era, MTV had to take a unique approach to the micro-blogging service during the broadcast.

Video blogger Justine Ezarik — known to the Internet world as iJustine — came onboard to be our Twitter correspondent, and with the help of some fresh technology, she was able to track and respond to the Twitter trends in real time. Once the show wrapped, the Tweeter Tracker was made available on the VMA Web site so fans could see for themselves exactly what was popping when.

The experiment paid off, as 1.3 million VMA-related tweets were unleashed between the time the show started and when it wrapped Sunday night. By Monday morning, the number had ballooned to 2 million. The numbers were unprecedented for Twitter. "During the VMAs, Twitter experienced three times our average volume of tweets," Twitter's Chloe Sladden said. "[It was] twice as many as during the news surrounding Michael Jackson this past summer."

Twitter became a huge part of the show, as the tweet volume was both instantaneous and gigantic, but the service also allowed stars — many of whom were actually inside Radio City Music Hall — to shape the narrative of the evening. So when Kanye West bum-rushed Taylor Swift's acceptance speech, Katy Perry, Pink and Hayley Williams (among others) were able to weigh in instantly.

The whole Twitter-centric approach made the VMAs compelling television not only from a performance approach, but also from an interactive one. "The unique level of viewer engagement MTV was able to inspire during the VMAs was impressive," Sladden added. "We think Twitter can be the way television becomes more interactive, and MTV is showing us the way," MTV.com reports.
It was also reported, the MTV Video Music Awards contained some certifiably legendary moments over the years — from Madonna's "Like a Virgin" performance in 1984 to Nirvana's unforgettable set in 1992, from Britney's coming-out party in 2000 to this year's Michael Jackson triute , with about a million stops in between. If you can think of a groundbreaking performance or star-making turn, there's a pretty good chance it happened at the VMAs.

That said, for better or worse, the VMAs have — at times — also been a stomping ground for celebrity bad behavior. And in line with that, er, legacy, the media world is in an uproar over Kanye West's onstage antics at Sunday's VMAs, in which he interrupted Swift's acceptance speech for Best Female Video and essentially said that Beyoncé deserved the award.

In fact, men (and the occasional woman) have been behaving badly at the big show for more than two decades now, doing the kind of stuff (brawls, trespassing, condescending and bloviating speeches) that could land normal folk in jail. So, while we're not condoning West's outburst by any stretch, we do feel compelled to point out that he's not alone, MTV.com reports.