Doctors Want To Be Protected Against Flu

U.S. doctors are oppressed by foreboding of great losses in   their incomes as a result of increase in flu cases all over the country this season. 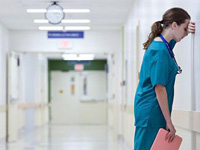 Doctors Want To Be Protected Against Flu

As they prepare to treat a possible onrush of pandemic flu cases this fall, doctors across the country try to secure themselves from the ravages of the new virus and its potential fallout.

Several medical associations are in talks with provincial governments over special fees or subsidies to compensate physicians in the event of an H1N1-flu emergency that disrupts their practices -- and hobbles their ability to bill for services. Some are also eyeing new fees that would ensure doctors are reimbursed for a surge of extra patients.

The provisions range from a charge for telephone consultations with flu patients, to hourly rates of several hundred dollars for doctors who take on the influenza battle full-time to short-term insurance for those who get sick.

Some critics question the optics of such deals at a time when the health-care system, they argue, should be selflessly focused on the public's well-being.

Medical associations, however, say they only want to protect doctors from suffering financially because of a situation that is beyond their control -- and that could well threaten their health, National Post reports.