Matt Damon: Sacrifice To The Art Of The Film

Matt Damon put on 30lbs of weight to play the role of business executive-turned-FBI histleblower Mark Whitacre in his new movie, The Informant! 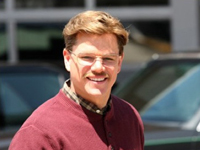 Matt Damon: Sacrifice To The Art Of The Film

His latest guise is far cry from Matt's usual hunky persona, which saw him being named The Sexiest Man Alive by U.S. magazine People in 2007.

Matt admitted he had piled on the pounds 'mainly through pizza and beer' and said he enjoyed carrying the extra weight.

For the role he dresses as a geeky business executive, wearing metal-rimmed glasses and a caterpillar-like moustache.

Matt has reunited with Ocean's trilogy director Steven Soderbergh for the film, which has been adapted from Kurt Eichenwald's 2000 book The Informant: A True Story.

The  action thriller also stars Quantum Leap actor Scott Bakula and Back To The Future baddie Thomas F. Wilson and is set for release next year, The Daily News reports.