Matt Damon has laughed off internet rumours that he died during a hiking accident. 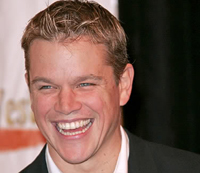 The star was stunned when reputable news groups called his publicist for a comment without realising the internet story was a prank.

He said: 'My publicist got all of these phone calls from very reputable sources. I got forwarded the story, which, if you read it, it just gets sillier and sillier, and, by the end, the guy who's said to be my agent is quoting the lyrics to the Fresh Prince of Bel Air." Matt also added:   'My publicist's like, 'Did you even read the story?' Misinformation is quicker because you [bleep] are lazy! That's how these things spread like wildfire.'

The Departed star  is now promoting his new movie, The Informant!, which premiered at the Venice film festival earlier this week, according to Daily News' report