The famous US television, film and theatre writer Larry Gelbart, who is best remembered for the M*A*S*H TV comedy series, has died at 81. 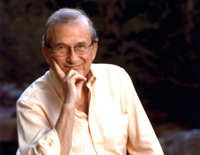 Mr Gelbart died at his California home after a battle with cancer.

M*A*S*H - about army doctors during the Korean War - began in 1972 and won Mr Gelbart an Emmy award.

He also won a Tony award for A Funny Thing Happened on the Way to the Forum, and was twice nominated for an Oscar, including for the film Tootsie.

Mr Gelbart was brought in to develop the TV version of M*A*S*H, which had been filmed for the big screen by Robert Altman in 1970.

Mr Gelbart wrote 97 shows over four seasons before leaving. The comedy show went on until 1983 as one of the most successful on US television.

His Oscar nominations were for the Dustin Hoffman movie Tootsie and Oh, God!, starring George Burns.