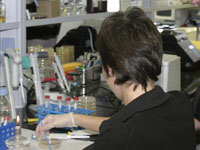 On July 15, a panel of cancer experts recommended the FDA not approve the use of Yondelis, saying risks of heart and liver toxicity outweighed its limited ability to keep the disease in check.

"The agency has requested additional information, including overall survival data from the company's ongoing pivotal trial and additional clinical pharmacology studies," a Centocor statement included in the filing said.

In a preliminary review released ahead of the meeting, FDA said it was considering whether to wait for more data on survival rates before making a decision on the drug, according to Forbes' report.