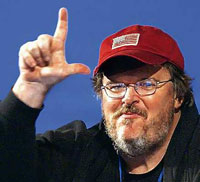 “What I don’t understand is who votes for him and his party,” Moore told the Rome-based paper. “He is an embarassment for Italy and I know what I’m talking about because we’ve also done things in the U.S. that have been embarrassing,” reports Bloomberg.

Moore says he has been making movies about the subject for more than 20 years, starting with his debut Roger and Me in 1989.

In his latest film he revisits his first target, General Motors, which had a huge operation in his home town of Flint, Michigan, until it shut its factory, decimating the local economy.

With his usual ire, Moore says the problem goes back almost 30 years ago with the introduction of "Reaganomics", which led to tax cuts for the highest earners and an easing of banking regulations, BBC News reports.

After much success at Cannes, Moore premieres the movie Sunday in his first appearance at the Venice Film Festival. It was warmly received at a press showing Saturday evening and won positive reviews. Variety called it one of Moore's "best pics."

"I am personally affected by good people who struggle, who work hard and who've had their lives ruined by decisions that are made by people who do not have their best interest at heart, but who have the best interest of the bottom line, of the company, at heart," Moore told reporters Sunday.

"Capitalism: A Love Story" is competing for the Golden Lion, which will be awarded Sept. 12, The Associated Press reports.