Michael Jackson to be buried in Mausoleum

Seventy days after his sudden death, Michael Jackson will be interred in what may or may not be his final resting place Thursday evening. Only his family and closest friends will attend the private funeral inside the ornate Great Mausoleum on the grounds of Forest Lawn cemetery in Glendale, California. 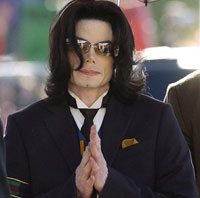 Michael Jackson to be buried in Mausoleum

The news media, which has closely covered every aspect of Jackson's death, will be kept at a distance, with cameras no closer than the cemetery's main gate. The massive mausoleum, which is normally open to tourists, was closed Wednesday as preparations were completed for the funeral. A security guard blocking its entrance said it would reopen to the public on Friday, CNN reports.

Officials and family representatives have remained tight-lipped about the precise location of Jackson's final resting space, but the mausoleum contains the bodies of many of old Hollywood's elite, including Gracie Allen, George Burns, Nat King Cole and Walt Disney.

Although Jackson's life was played out in the public eye, it seems the King of Pop will finally get the peace he always craved -- Forest Lawn discourages sightseers with its managers and security becoming experts at keeping gawkers at bay.

"We have force mulitpliers," said Sgt. Tom Lorenz of the Glendale Police Department. "We call that our canine units and we call that our air support unit, and also we have some undercovers," ABC News inrotms.

Last week, coroner's officials said they believed Jackson's death was homicide, and his death certificate has been amended to reflect that. It cites "injection by another" as the fatal injury.

Investigators have said a mix of the powerful anesthetic propofol and another sedative killed the pop singer. The new record lists "acute propofol intoxication" as the main cause of death and "benzodiazepine effect" as another significant contributor.

The certificate does not mention Dr. Conrad Murray, who was Jackson's personal physician. He told detectives that he gave the singer a series of sedatives and propofol to try to help him sleep.

The coroner's determination of homicide makes it easier for prosecutors to seek criminal charges, but does not necessarily mean a crime was committed, The Associated Press reports.