A US woman found after being abducted as a girl in 1991 gave birth to two children fathered by her alleged kidnapper - the first when she was 14. 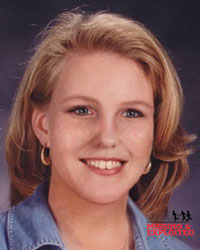 Jaycee Lee Dugard and her daughters, 11 and 15, were kept in a "hidden backyard within a backyard", police say.

Alleged kidnapper Phillip Garrido, 58, and his wife Nancy Garrido, 54, are being held in custody in California.

DNA tests are being done to confirm Ms Dugard's identity, but meanwhile she has been reunited with her mother, reports BBC News.

Jaycee Lee Dugard, who was abducted from in front of her South Lake Tahoe home in 1991, was privately reunited with her mom Thursday night.

"It's an absolute miracle. Can you imagine this after 18 years?" said Jaycee's stepfather, Carl Probyn.

Cops arrested a 58-year-old religious fanatic and convicted rapist, Phillip Garrido, who they say kept Jaycee hidden in a "secret backyard" and fathered two children with her - one the same age as the victim was when she vanished.

"I have something to tell you. I have babies," Jaycee told Terry Probyn, 50, who asked how many.

Also arrested was Garrido's wife, Nancy, who police charge was with Garrido when they snatched Jaycee on June 10, 1991, as she walked to her school bus stop, informs New York Daily News.

According to ABC News, Jaycee's kidnappers. Phillip and Nancy Garrido, were arrested in what El Dorado County Undersheriff Fred Kollar said was a stranger abduction - "They literally snatched her off the streets - in which she was taken to a home in Antioch, Calif., and kept in a backyard prison compound, hidden from neighbors.