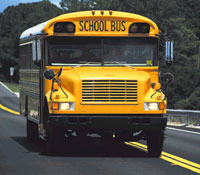 The man drove the bus for less than a mile before a student confronted him and the bus crashed into a wall off the road, according to police.

Arris Pitmon, 23, darted toward the bus and hoisted himself in through an open window, Polite said, CNN informs.

A dozen or so screaming students were on the bus as it plunged, many bounding out of the emergency exit in the back, said Atlanta Public Schools spokesman Keith Bromery. Two students and the bus driver suffered minor injuries, police said.

By the time Pitmon was arrested after the crash, he was naked, police said. Turner, who had rushed to the scene, said the man lost his pants while trying to escape from bystanders. "This was a weirdo," said Turner, who is 38. "Something was wrong with this guy. We turned him over and he just had a condom on. Maybe he was stripping or something — I had no earthly idea."

Pitmon jumped into the stopped bus as a student from Forest Hills Academy, which is grades seven through 12, was being dropped off in a southeast Atlanta neighborhood, said Atlanta Police Officer James Polite. He took control of the steering wheel, then left the seat to chase the driver, who had run to the rear, the officer said.

A student tried to take the wheel, but Polite said Pitmon fought him to regain control of the bus. The bus continued forward, left the roadway and crashed through a fence, finally stopping at a wall about 175 feet off the pavement, The Associated Press reports.