Madonna Booed After Standing Up For Gypsies In Romania

A Russian trio performing Gypsy music with Madonna on her worldwide "Sticky and Sweet" tour says it regrets the pop star was booed during her Bucharest concert for criticizing widespread discrimination against Gypsies. 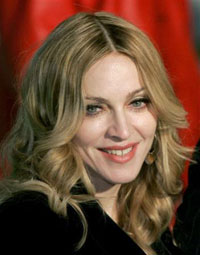 Madonna Booed After Standing Up For Gypsies In Romania

Thousands of people applauded the trio's performance with Madonna in Bucharest on Wednesday night. But minutes later they booed Madonna when she said discrimination should end against East Europe's Gypsies, also known as Roma, The Associated Press reports.

According to BBC News, publicist Liz Rosenberg said Madonna made the comments after being made aware of the prejudice towards Romany people in eastern Europe.

The star uses a group of Roma musicians on her Sticky and Sweet tour.

Madonna paused during her two-hour show to say: "It has been brought to my attention, that there is a lot of discrimination against Romanies and Gypsies in general in Eastern Europe - it made me feel very sad."

"We don't believe in discrimination, we believe in freedom and equal rights for everyone."

"It's been brought to my attention that there's a lot of discrimination against Romani," Crusader Madge told the throng of 60,000 assembled in the shadow of former dictator Nicolae Ceausescu's massive palace. "And that makes me very sad." One must never make Madonna sad.

The crowd did clap when Roma musicians performed on stage. Yet, when Madge said, "We believe in freedom and equal rights for everyone!" they shouted "No!"