Hugh Jackman to be "The Greatest Showman on Earth"

Hugh Jackman is to turn into one of Hollywood's biggest showmen. 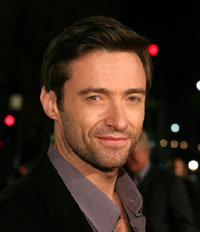 Hugh Jackman to be "The Greatest Showman on Earth"

Jackman may be following his song-and-dance triumph as host of the Academy Awards with a role as legendary showman P.T. Barnum in the musical tale "The Greatest Showman on Earth," The Associated Press reports.

According to femalefirst.co.uk, the film will explore the entertainer's infatuation with singer Jenny Lind, and Anne Hathaway is being considered for the role.

Jackman, who won a Tony Award for his role in Broadway show " The Boy From Oz ", will produce the movie along with Laurence Mark and John Palermo, The Times of India reports.

Meanwhile, Twentieth Century Fox said on Tuesday that Jackman will star in "The Greatest Showman on Earth," but the studio has not set a start date for production or scheduled a release for the film about the 19th century traveling circus promoter.

Jackman told Reuters in April that he wanted to star in a movie musical, a genre that hit its peak in 1930s Hollywood and has surfaced only sporadically in recent years' movies like "Hairspray" and "Mamma Mia!"

While he is best known for playing superhero Wolverine in the "X-Men" movies, Jackman starred in a 1999 television movie version of the stage musical "Oklahoma!"

He won a Tony, Broadway's highest honor, in 2004 for his role in musical "The Boy from Oz," and his turn hosting the Tony Awards helped convince Oscar organizers to hire him as host of that Hollywood awards show this past February.

The actor was the first non-comedian to host the Oscars in more than two decades. He brought Broadway glitz to the telecast by opening with a musical salute to the best picture nominees, and later by singing and dancing opposite Beyonce, Reuters reports.