3 Dead From Pneumonic Plague in China

The death toll from an outbreak of pneumonic plague in northwest China has risen to three, state media reported on Tuesday as health officials maintained a quarantine lockdown on a town of 10,000 people. 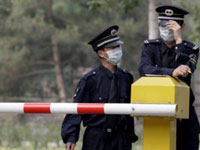 3 Dead From Pneumonic Plague in China

The latest victim was a 64-year-old man who died on Monday in Ziketan, a remote town in a Tibetan area of Qinghai province where two fatalities had previously been reported, the Global Times said.

At least nine other people were infected with the highly-virulent disease -- most of them relatives of the first victim, a 32-year-old herdsman, reports said, quoting local health authorities, AFP reports.

Authorities urged anyone who had visited the town — more than 300 miles (480 kilometers) west of Beijing — since mid-July and has developed a cough or fever to seek hospital treatment. Pneumonic plague is spread through the air and can be passed from person to person through coughing, The Associated Press reports.

Meanwhile, medical staff are disinfecting the sealed-off town of Ziketan in northwest China and killing rats, insects and fleas that can carry the disease.

Police set up checkpoints on the roads around the farming community in Qinghai province when the outbreak was discovered on Thursday. Ziketan is an ethnically Tibetan town of 10,000 people in one of China's least populated regions.

An American student traveling in the area, who asked to remain anonymous, says drivers are accepting about $300 to take people out of the town.

"I think people are scared and actually fleeing the disease," she said.

She says most of the restaurants and Internet cafes in town are closed because people do not feel safe eating out. Many who do go out wear medical masks. Usually there are nightly traditional Tibetan dancing sessions, but those stopped at the beginning of the outbreak, Voice of America reports.