Producers and Fox announced Monday that newest "American Idol" judge Kara DioGuardi will return to appear on the show next season. 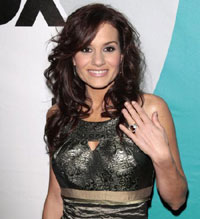 "Kara's spitfire personality and sharp musical sensibility infused 'American Idol' with a new energy last year," said Mike Darnell, president of alternative, Fox. "She clearly has a keen eye for talent - spotting Adam Lambert's superstar quality early on last season - and her performance on the Season Eight finale was one of the most memorable in recent 'Idol' history," Billboard reports.

"We are so happy to welcome back Kara for her second season with Idol," creator/executive producer Simon Fuller said in a statement in Fox's official announcement on Monday. "She is a breath of fresh air, and her passion for music and her understanding of talent is invaluable. This show is all about discovering new talent, and Kara's championing of Adam Lambert is proof positive of her great instinct," Seattle Post Intelligencer reports.

Before DioGuardi debuted on "American Idol," she was described as a Grammy Award-nominated songwriter. Though technically true, she is in fact a Latin Grammy nominee for co-writing a 2007 song of the year contender — "Bella Traicion." She shared the nomination with the track's singer, Belinda, as well as Mitch Allan, Ben Moody and Nacho Peregrin. They lost the race to Juan Luis Guerra's "La Llave de Mi Corazon," which also won record of the year. "Bella Traicion" wasn't nominated for that top honor.

DioGuardi has won other kudos. In 2003, she took home a BMI Cable Award for co-writing and performing "Somethin' to Say," the theme to the now-canceled Lifetime network series "For the People," which starred Lea Thompson, Debbi Morgan, A. Martinez and Cecilia Suarez. And she was named BMI's pop songwriter of the year for 2006, as she had accumulated 10 BMI awards in the previous four years for having written the "most performed songs on the radio," The Los Angeles Times reports.