A 47-year-old La Mesa man was found guilty of making threats against President Barack Obama during the 2008 presidential campaign, ranting in an Internet post that the candidate should be shot. 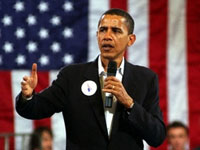 In a racially laced diatribe Oct. 22, Walter Bagdasarian said the country would essentially fall apart during an Obama presidency and suggested assassination. U.S. District Court Judge Marilyn Huff said Bagdasarian's tirade against Obama was a “definite threat” and found him guilty of two counts of making threats against a major candidate for president of the United States, The San Diego Union Tribune reports.

Bagdasarian, who waived his right to a jury trial, could receive up to 10 years in prison when he is sentenced in October. Bagdasarian remains free on $100,000 bail, Examiner.com reports.

On election day in November, Bagdasarian also sent e-mails calling for Obama to be shot.

Meanwhile Bagdasarian's attorney argued that his client had been drunk when sending the messages. While admitting that the postings were 'racially ugly,' lawyer Ezekiel Cortez said his client never meant for the threats to be carried out, Monsters and Critics.com reports.