Merce Cunningham Dies in Sleep at 90

According to Bloomberg influential and innovative choreographer Merce Cunningham died in his sleep last night, he aged 90, Rolling Stone reports. 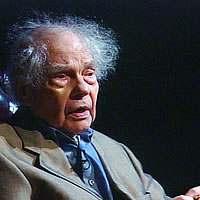 Merce Cunningham Dies in Sleep at 90

A statement from the Cunningham Dance Foundation said the New York-based dancer "died peacefully in his home of natural causes" on Sunday.

He formed the Merce Cunningham Dance Company in 1953 and choreographed nearly 200 works for it.

Although he used a wheelchair by the end of his career, Cunningham danced on stage right into his 80s.

The statement said he "revolutionised the visual and performing arts, not for the sake of iconoclasm, but for the beauty and wonder that lay in exploring new possibilities," BBC News reports.

He worked closely with composer John Cage, his longtime partner who died in 1992, and with visual artists such as Jasper Johns.

Though he had to use a wheelchair in later years, he remained an active artist. When he turned 90 in April, he premiered a long piece called "Nearly Ninety," The Associated Press reports.

In his final years he became almost routinely hailed as the world’s greatest choreographer. For many, he had simply been the greatest living artist since Samuel Beckett, The New York Times reports.