All Astronauts Enjoy First Day Off

The astronauts in orbit, all 13 of them, enjoyed their first day off in more than a week Saturday after a series of grueling spacewalks. 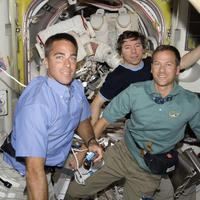 All Astronauts Enjoy First Day Off

"Today we hope you can enjoy some well-earned time off," Mission Control said in a morning message. "At orbital rates, you can't stop to smell the roses, but you can savor the view from the best seats in the house."

The astronauts wrapped up their fourth spacewalk Friday, completing critical battery changes at the international space station. One more spacewalk is planned for Monday to perform additional station work.

In a series of TV interviews, two-time spacewalker Christopher Cassidy said he's learned to go slowly, especially right after he goes out the hatch. Cassidy's carbon dioxide levels were high during both spacewalks, but not enough to make him sick. He said he felt fine the whole time.

His first spacewalk was cut short because of the problem, The Associated Press reports.

According to Space.com, two determined astronauts added a fresh set of vital batteries on the International Space Station Friday during an extra-long spacewalk made more so by the need to take things slow and steady.

Spacewalkers Chris Cassidy and Tom Marshburn spent more than seven hours replacing four batteries at the core of the space station's oldest solar arrays, which sit at the very edge of the outpost's left side.