Last Veteran of WWI, Harry Patch, Dies at the Age of 111

Harry Patch, the last British soldier to fight in the trenches during the First World War has died aged 111, his care home said Saturday. Patch, who fought at the Battle of Passchendaele in 1917, was also Britain's oldest man following the death of fellow veteran Henry Allingham one week ago. 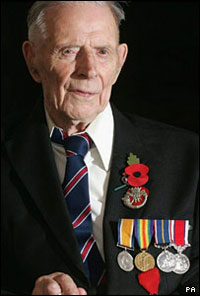 Last Veteran of WWI, Harry Patch, Dies at the Age of 111

Claude Choules, 108, who lives in Perth Australia, and who served with the Royal Navy, is now the last British veteran of the Great War, reports AFP.

Harry Patch, knicknamed the "Last Tommy", died peacefully at his care home in Wells, Somerset, at 9am this morning. His death comes one week after that of fellow veteran Henry Allingham, then the world’s oldest man, at 113. Patch once said: "Millions of men came to fight in this war and I find it incredible that I am the only one left."

Born Henry Patch on 17 June 1898, in Coombe Down, near Bath, he became a plumber after leaving school. He signed up for the army when he was 18, serving as a private in the Duke of Cornwall's Light Infantry. The Battle of Passchendale at Ypres was one of the bloodiest land battles of the war and claimed 70,000 of Patch’s fellow servicemen, informs Times Online.

According to The Associated Press, Prime Minister Gordon Brown said the whole country would mourn "the passing of a great man." "The noblest of all the generations has left us, but they will never be forgotten. We say today with still greater force, We Will Remember Them," Brown said.

Prince Charles said "nothing could give me greater pride" than paying tribute to Patch.