Levy Izhak Rosenbaum of Brooklyn called himself a "matchmaker," but his business wasn't romance. Instead, authorities say, he brokered the sale of black-market kidneys, buying organs from vulnerable people from Israel for $10,000 and selling them to desperate patients in the U.S. for as much as $160,000. 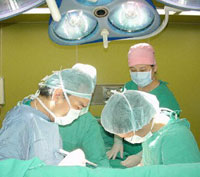 The alleged decade-long scheme, exposed this week by an FBI sting, rocked the nation's transplant industry. If true, it would be the first documented case of organ trafficking in the U.S., transplant experts said Friday, The Associated Press reports.

Israel Medical Association spokeswoman Orna Cohen said the organization had no reports there of Israelis selling organs. "If it's true, then it's shocking," she said.

Micky Rosenfeld, a spokesman for Israel's national police force, said Israeli police were not involved in the investigation, and he would not comment further.

Under 1984 federal law, it is illegal for anyone to knowingly buy or sell organs for transplant. The practice is illegal just about everywhere else in the world, too.

But demand for kidneys far outstrips the supply, with 4,540 people dying in the U.S. last year while waiting for a kidney, according to the United Network for Organ Sharing . As a result, there is a thriving black market for kidneys around the world.

According to a criminal complaint filed in U.S. District Court in Newark, an undercover FBI agent teamed with an informant -- who cooperated after a 2006 bank fraud charge -- to uncover the scheme. The document tells the story of how the partnership allegedly snared Levy Izhak Rosenbaum, a self-styled real estate dealer from Brooklyn. Over the course of about 18 months, the complaint says, Rosenbaum struck a deal with the agent to obtain a kidney from an Israeli donor. He planned to give the donor $10,000, federal authorities said, and charged his client a handsome fee: $160,000.

"I am what you call a matchmaker," the complaint quotes Rosenbaum as telling the undercover agent, informs New Jersey News.