3D has been the big focus of this year’s San Diego Comic Con, so it’s no surprise that when you get a bunch of movie industry visionaries together, watching movies while wearing funny glasses is a front and center topic. EW attended the Visionaries Panel at Comic Con tonight where Peter Jackson and James Cameron took center stage, and talked 3D, Cinema Blend reports. 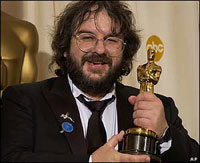 James Cameron and Peter Jackson are currently discussing their future plans of utilizing the 3D technology with their movies. The newest bit of news from James Cameron is that he is seriously considering converting Titanic into the 3D format.

He says that he has done the tests on the film and it looks amazing. Peter Jackson is also considering turning The Lord of the Rings Trilogy into 3D. James Cameron really feels that 3D technology is the future of movie making and we will never have the "smell-o-vision". Cameron would really like to see the frame rate sped up to 48 from 24, according to ScreenCrave.

Both men continue with high-tech pursuits outside of feature films . Jackson is developing a " King Kong " attraction for Universal theme parks that surrounds visitors with 3-D images and effects. Eight projectors will beam images onto giant screens surrounding the park tram, which will be stationed on a surface that shimmies and shakes with action as Kong battles a Tyrannosaurus Rex. The ride is set to open next summer, he said.

Cameron, meanwhile, is developing a company to expand the use of performance-capture technology, 3-D photography and digital projection for sports and music events.

"It could change the way we absorb music," he said.