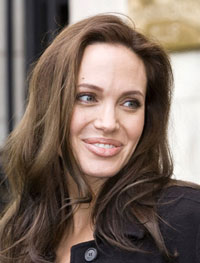 Jolie was given a tour of the Cross Sabers monument in Baghdad's Green Zone, where she posed for photos with troops, NECN reports.

She met with four families displaced from the district of Abu Ghraib, which is west of Baghdad. Parents told the actress and mother of six that their kids can't attend school, and that they don't have the money to pay for medical help.

She also made the time to hold a baby with a rash, New York Daily News reports.

According to UNHCR Jolie said during her one-day trip that there is progress in returning Iraqis to their homes after years of war, but more needs to be done.

"This is a moment where things seem to be improving on the ground, but Iraqis need a lot of support and help to rebuild their lives," the agency quoted Jolie as saying, The Associated Press reports.

"This region of the world, the stability of this region is important to all of us," she said.

"There are still three million people displaced, innocent families," she added. "We have still many young men and women from our country who are fighting every day, there are men and women from all countries who have lost their lives, and this is a time to try to make some positive change."

Jolie said when she returns to Iraq in the future she hopes to see the families now in the settlement of Chikuk living in homes built on land they own with help from the UNHCR, CNN reports.