President Barack Obama plans to announce on Friday a competition for $4 billion in federal grants to improve academic achievement in U.S. schools, the Washington Post reported on Thursday. 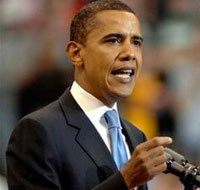 Obama wants states to use funds from the competition, dubbed the "Race to the Top," to ease limits on so-called charter schools, link teacher pay to student achievement and move toward common U.S. academic standards, the Post said, Reuters reports.

On Friday, Obama will officially announce the "Race to the Top," a competition for $4.35 billion in grants. He wants states to use funds to ease limits on charter schools, tie teacher pay to student achievement and move for the first time toward common academic standards. It is part of a broader effort to improve school achievement with a $100 billion increase in education funding, more money for community colleges and an increase in Pell Grants for college students, The Washington Post reports.

Donna Cooper, Rendell's policy secretary described the fund as "the catalyst in terms of focusing local school districts in the state on the changes that are necessary to turn around the schools that teach the kids who have the greatest challenges in life," CNN reports.