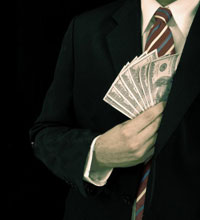 Reacting the case, Ed Kahrer, head of the FBI’s public corruption division in New Jersey, said the case shows that “corruption is a cancer that is destroying the core values of this state.” The state has seen more than 130 public officials plead guilty or be convicted of corruption since 2001, according to the Associated Press.

Waysun Dun, head of the bureau’s Newark office, said the case was “truly unprecedented” because of the number of those accused and the variety and geographic spread of their alleged crimes.

Gov. Jon Corzine, a Democrat whose re-election bid could be affected by the indictments, issued a statement saying, “Any corruption is unacceptable — anywhere, anytime, by anybody. The scale of corruption we’re seeing as this unfolds is simply outrageous and cannot be tolerated,” Detroit Free Press reports.