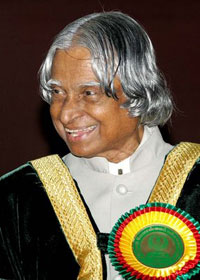 The airline said it had offered a formal apology to Kalam, 77, who was subject to a security screening at New Delhi's international airport on his way to the United States, NASDAQ reports.

The apology comes a day after the country's Bureau of Civil Aviation Security filed a complaint with the local police against the Houston-based carrier for "wrongfully" frisking Mr. Kalam on April 21, in contravention to bureau rules that exempt specified VIPs from such body checks.

The bureau, which is part of the civil aviation ministry, is responsible for laying down standards of pre-embarkation security and antisabotage measures for all civilian flights in India.

The filing of the first information report by the bureau followed strong protests by lawmakers in the Parliament earlier Tuesday over the frisking of the former President.

Continental said in a statement that it has formally apologized to the former president for any "misunderstanding and/or inconvenience related to the security screening on April 21."

"Our intention was never to offend [Mr.] Kalam or the sentiments of the people of India," a spokesman for Continental said, The Wall Street Journal reports.