A 112-year-old American has become the world’s oldest living man after the death of 113-year-old Briton Henry Allingham on Saturday. 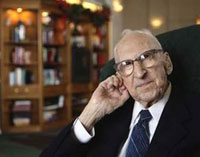 Walter Breuning was born on September 21, 1896. He learned to read by paraffin lantern, remembers his grandfather telling him about fighting in the 1860s US Civil War, and cast his first presidential ballot for Woodrow Wilson, reports Ireland Online.

According to KPAX-TV, what kind of advice does a man born in 1896 give about having a long life? Walter says its all about remaining active: "Keep your mind busy and your body busy at all times; you'll find out. I got told years ago...they tell you if you don't develop your mind...keep your mind going or it just goes right down the chute."

Now living at the Rainbow Retirement Home, Breuning takes one aspirin and eats two meals a day. He strolls the halls wearing a suit and tie and still walks the ramps to his second-floor apartment.

Breuning said he's more grateful for his health than he is for a world title.

"If you're in good health, you've got everything there is," he told the Great Falls Tribune.

Longevity doesn't run in Breuning's family. He said his father, a civil engineer, died at 50, and his mother, a housewife, at 46. Two brothers and two sisters died in their 70s, he said, The Associated Press reports.