Pope Benedict XVI has been operated on his right wrist after fracturing it in a fall while on holiday in the Italian Alps, an official said. 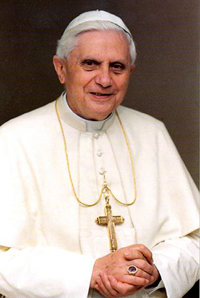 “It’s nothing serious,” the Vatican spokesman, the Rev. Federico Lombardi, said in a telephone interview. He said doctors had ruled out that Benedict had been taken ill before falling.

Doctors operated on the pope’s wrist for about 20 minutes, Reuters reported. Father Lombardi called the operation “not difficult.” He said doctors had inserted pins to help the pope’s wrist heal, using a local anesthetic.

He added that the pope would have to wear a cast for about a month. News reports showed Benedict leaving the clinic smiling and waving with his left hand, The New York Times reports.

The head of the Roman Catholic Church was a "friendly and excellent" patient, surgeon Manuel Mancini told reporters, describing the operation to insert two metal pins into the broken bone as "routine."

After spending more than six hours at the hospital, the pope emerged smiling, waving to well-wishers with his left arm as his right arm was in a cast.

The German-born pope returned to his chalet in the hamlet of Les Combes d'Introd where he began a two-week holiday on Monday, AFP reports.