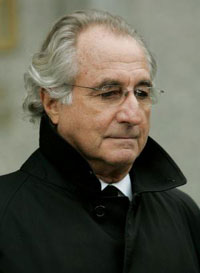 The agency yesterday transferred Madoff, 71, from a high- security lockup in Manhattan, where he’s been since his March 12 guilty plea, to the federal penitentiary in Atlanta. Madoff left that facility this morning and arrived at Butner shortly after 11:15 a.m., bureau spokesman Greg Norton said.

Madoff will be assigned today to one of five housing units, where he will live in “dormitory style housing,” Norton said. If healthy enough, he’ll be given a job. Norton declined to say whether Madoff may eventually be transferred to another prison. “This is where he’s been designated to be,” Norton said, Bloomberg reports.

Among Madoff's victims were Hollywood and international celebrities, several of the world's best-known banks and Jewish charities, some of which were forced to close after the scheme unraveled.