President Barack Obama said Tuesday that the U.S. jobless rate, already at its highest level in more than a quarter century, is likely to worsen for several months. 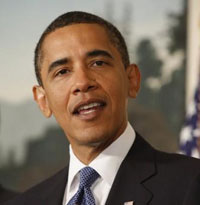 "My expectation is that we will probably continue to see unemployment tick up for several months," Mr. Obama told reporters after a meeting with Dutch Prime Minister Jan Peter Balkenende, The Wall Street Journal reports.

The president said Tuesday that renewed employment typically lags behind other signs of improvement as a swooning economy turns around.

More than 2 million jobs have been lost since Congress passed Obama's $787 billion economic stimulus package. The unemployment rate stands at 9.5 percent, the highest in 26 years.

Obama said the single biggest challenge for the U.S. and other nations is the creation of enough jobs that pay good wages, The Associated Press reports.

While he said he doesn't have a "crystal ball," Mr. Obama said he anticipates unemployment will follow historical trends and lag "for some time" even after an economic recovery begins.

On the positive side, he said the U.S. has "seen some stabilization in the financial markets, and that's good because that means companies can borrow and banks are starting to lend again," The Wall Street Journal reports.