Tony Romo and Jessica Simpson broke up the night before her 29th birthday, People.com reports. 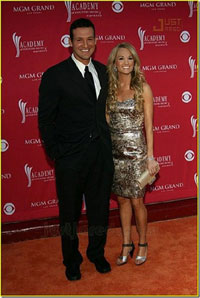 "She is heartbroken," says the source. "She loves Tony. But it's been difficult lately. He's busy with his career and she's getting ready to shoot her show (The Price of Beauty). They decided to part ways , " Newsday reports.

Meanwhile the news leaked that the Cowboys star even spent his [ex]girlfriend’s party with a group of friends at Hollywood club MyHouse – and was surrounded by girls who hung out at his table.

Simpson took to her Twitter page and wrote she was “on top of the world yelling ‘I LOVE GETTING OLDER,’” Monsters and Critics.com reports.

Yahoo News addressed, “Everyone needs to know that hope floats … grab the strings and pull it back to you.” Three hours later she wrote, “Falling asleep with my mom and the dogs. Please lord give all of my beautiful fans, friends, enemies, and family rest. Bring all of us peace.”

Even though Jessica seems to still have hope for her love-life, her heart may be torn. View photos and a video below, Right On Music reports.