The union that represents flight attendants who worked for Northwest Airlines before it was bought by Delta Air Lines is crying foul over Delta's failure to offer bigger sizes for its signature red dress uniform designed by Richard Tyler . 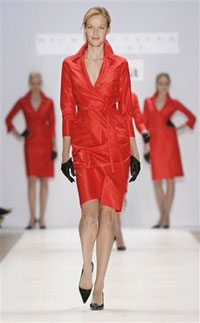 When he was hired to create his uniform collection, Tyler said he wanted them to "look sexy and great."

The Northwest chapter of the Association of Flight Attendants -CWA has filed a grievance with the world's largest airline operator, asking it to offer the red dress up to size 28. The union hopes the grievance will go to mediation in August.

The red dress currently is only offered up to size 18, though a Delta spokeswoman said the airline offers a range of outfits in other colors and styles up to size 28 that flight attendants can wear.

"I think red is an eye-popping color and it's not subtle, and to me by not offering it in a size over 18, Delta is saying, 'We don't want you wearing that if you are over size 18,'" Reller said. "But the job isn't about being sexy. It's about safety" The Associated Press reports.

According to The Atlanta Journal-Constitution, Richard Tyler, who called the Delta uniforms “chic and glamorous” when they debuted, has participated in some of the flight attendants’ fit sessions to try on uniform pieces.

“This is Richard Tyler’s collection — he designed it, he knows it better than anyone,” Laughlin said. “So his perspective on how the pieces were meant to be worn, perhaps how the pieces could be best altered to fit someone — that’s invaluable perspective.”