Eric Schmidt to talk with Apple Over Board Role

Google's CEO Eric Schmidt said that he plans to discuss with Apple his role on its board of directors, in light of recent news that Google will get into the operating system business. 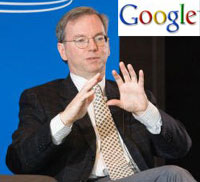 Eric Schmidt to talk with Apple Over Board Role

"I'll talk to the Apple people. At the moment, there's no change," Schmidt said in a briefing with reporters at a technology conference in Sun Valley, Idaho on Thursday, PC World reports.

In an interview with Bloomberg Television, Eric Schmidt claimed that the company's new Chrome OS would eventually be on "millions" of personal computers and might eventually take users away from Microsoft's Windows. "It's certainly possible" Schmidt said. "It's certainly also possible that Microsoft will change its strategy to address that."

Faced with a slowdown in online advertising, Schmidt noted that Chrome OS would help the company drive more users to its sites, particularly its search engine. "We make money as people adopt the Internet and broadband and use these new powerful operating systems," he said during an interview at the Allen & Co. media conference in Sun Valley, Idaho. "We know that they eventually do more searches and click on more ads," Mediapost.com reports.

Schmidt has served on Apple's board since 2006. He has already implemented a policy of recusing himself from discussions involving the iPhone at Apple, given that Google's Android software competes with the iPhone for consumer and developer attention, but before his appearance at the Sun Valley media conference Thursday, he had not responded to direct inquires about whether he'll now have to do something similar when Mac OS X development is discussed at Apple, CNET News reports.