Steve Fossett, the first person to complete a solo, nonstop flight around the world in a hot-air balloon and the first to fly an airplane solo around the world nonstop, died on a simple pleasure flight two years ago because he ran into a mountain downdraft, the National Transportation Safety Board said on Thursday, The New York Times reports. 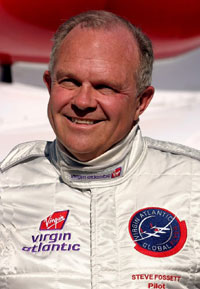 The tricky winds were the main reason Fossett slammed into a granite mountain wall Sept. 3, 2007, the National Transportation Safety Board said.

Fossett and his plane vanished after he took off from a private landing strip in Nevada for a morning pleasure flight. His disappearance triggered one of the biggest search operations in U.S. history, The San Francisco Chronicle reports.

Before his last flight, Fossett commonly used his plane for spotting cattle. It had been involved in an accident earlier in the year, in May, when it hit a barbed-wire fence during a landing roll. A new speed propeller was put on the plane and it was returned to service a month later, flying 10 to 12 hours since, according to the report, CNN reports.

Investigators said that downdrafts probably surpassed the plane's maximum rate of climb of 300 feet per minute at an altitude of 13,000 feet and 370 feet at 12,000 feet. Fossett was flying in a part of the Sierra Nevada where the peaks are more than 13,000 feet high.

The safety board's report ends the saga that included Fossett's disappearance for more than a year before a hiker discovered his identification cards and other personal effects near Minaret Summit in the Sierra, The Los Angeles Times reports.