David Carradine, the star of the 1970s television series “Kung Fu” and the title villain of the “Kill Bill” movies, has died in Thailand, The Associated Press reported. The United States Embassy in Bangkok told The A.P. that Mr. Carradine had been found dead in his hotel suite in Bangkok, where he was working on a movie. He was 72. 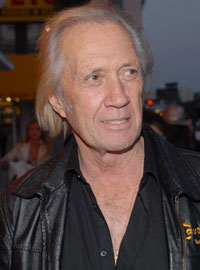 Mr. Carradine was part of an acting family that included his father, John; his brother, Bruce, and half-brothers Keith and Robert; and his nieces Ever Carradine and Martha Plimpton.

After a short run as the title character in the 1966 television adaptation of the Western “Shane,” he found fame in the 1972 series “Kung Fu” as Kwai Chang Caine, a wanderer raised by Shaolin monks to be a martial arts master. He enjoyed a career resurgence in recent years when he was cast by Quentin Tarantino in the action movies “Kill Bill: Vol. 1″ and “Vol. 2.”, informs The New York Times.

According to Bloomberg, Carradine was born John Arthur Carradine on Dec. 8, 1936, in Hollywood, California, where his father was part of director John Ford’s company of character actors. His mother was the former Ardanelle McCool, the first of his father’s four wives.

His theater career began when he studied drama at San Francisco State, according to a biography on his Web site. He continued to perform in musicals and dramas while in the U.S. Army.