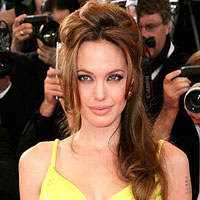 The actress grabbed the No. 1 spot on the magazine's Celebrity 100 list, which ranks stars based on media exposure and earnings.

Jolie earned $27 million, moving up from third on last year's list, Forbes said. At No. 2, Winfrey is still the highest earner -- $275 million.

Jennifer Aniston and Brad Pitt were eighth and ninth, respectively.