The last maker of Steinway pianos dies at age 93

Henry Z. Steinway, the great-grandson of the founder of the legendary piano-making company his family started in 1853, is dead. He was 93. 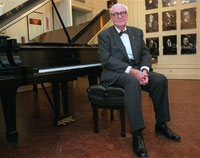 The last maker of Steinway pianos dies at age 93

Susan Steinway, his daughter, confirmed that her father died on Thursday in Manhattan.

Henry Zeigler Steinway was the last of his family to run the company founded by Henry Engelhard Steinway. He sold it to CBS Corporation in 1977.

Steinway retired at 65, but he continued to visit the Steinway Hall in Manhattan until a few months ago.

President Bush presented Steinway with the National Medal of Arts in 2007.

The handcrafted pianos were the instruments of choice for such greats as Sergei Rachmaninoff, Vladimir Horowitz and Artur Rubinstein.

CBS sold Steinway in 1985 to what was then a band-instrument manufacturer. That company went public in 1998 and is now known as Steinway Musical Instruments.