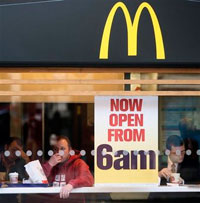 The Wisconsin man said he hit the 23,000 milestone last month, continuing a culinary obsession that began May 17, 1972, and is fed by his obsessive-compulsive disorder.

Gorske has kept every burger receipt in a box. He says he was always fascinated with numbers, and watching McDonald's track its number of customers motivated him to track his own consumption.

He used to order fries every day in the 1980s but began to cut back in the '90s, now eating them about once a month. He eats two Big Macs, which each have two beef patties, cheese and a special Mac sauce, along with two parfaits a day. Gorske has written a book about his experience.

"Sometimes people call me a freak but it doesn't bother me. I just say respect people as they are," he told The Associated Press. "I just want to make sure people understand I'm not going to change."

He can instantly recall the eight days in which he failed to satisfy his craving. One was in 1988, the day his mother died, to respect a request she made.

"I made a promise to her and I always keep my promises," he said. "I also promised her I wouldn't cut my hair and in 20 years I haven't."

He twice failed to grab a Big Mac because of his job. A prison worker, he said a number of work emergencies kept him on the clock past midnight so he recorded those days as missed days.

Three other times he was traveling and couldn't find a McDonald's. He also went Big Mac-less on the U.S. holiday of Thanksgiving in 2000, and during a 1982 snowstorm that prevented a local McDonald's franchise from opening.

"That's when I started a habit where I kept them in the freezer," he said. He keeps one or two burgers on hand but increases his inventory to four to five during the winter.