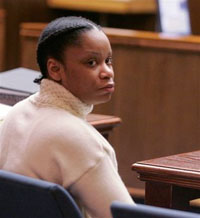 An Ohio mother convicted of killing her infant daughter in a microwave oven is to hear her punishment Monday.

A jury spared 28-year-old China Arnold from the death penalty last week after it couldn't reach a consensus. That leaves sentencing options of life in prison without parole, or with parole after at least 25 or 30 years.

The jury convicted Arnold of aggravated murder in the 2005 death of month-old Paris Talley. It was Arnold's second trial; the first ended in a mistrial when new witnesses surfaced.

Defense attorney Jon Paul Rion has asked for a third trial, saying a former cellmate who said Arnold confessed has changed her story.