Let's see Hari Puttar get out of this one. 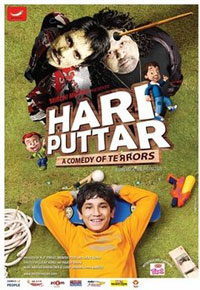 Bollywood producers set to release a film called "Hari Puttar: A Comedy of Terrors" are working to fend off a lawsuit filed by Warner Bros. that claims the movie title hews too closely to their mega-famous boy wizard franchise.

While Bollywood films often borrow liberally from Western movies, producers of "Hari Puttar: A Comedy of Terrors" say their movie bears no resemblance to any film in the "Harry Potter" series.

"There is absolutely nothing to link 'Hari Puttar' with 'Harry Potter,"' said Munish Purii, chief executive officer of Mumbai-based producer Mirchi Movies. Hari is a common name in India and "puttar" is Punabji for son, he said.

"Even if it does rhyme with Harry Potter, surely there is a limit to cases?" Purii said.

The film is not a tale of wizard spells or flying broomsticks, but rather a story of an Indian boy left home alone, who fights off burglars when his parents go away on vacation - a plot more reminiscent of the film "Home Alone," starring Macaulay Culkin.

Warner Bros. is seeking an injunction against the film, which is set for release Sept. 12. Hearings began Monday and the next is scheduled for Sept. 2.

Warner Bros. spokeswoman Deborah Lincoln confirmed that the company has filed a lawsuit against the producers of "Hari Puttar."

"Warner Bros. values and protects intellectual property rights. However, it is our policy not to discuss publicly the details of any ongoing litigation," Lincoln said in an e-mail to The Associated Press.