Gary Glitter returns to Britain after molesting children in Vietnam

Mobbed by photographers and greeted by police, disgraced rocker Gary Glitter finally arrived in Britain on Friday after being deported from Vietnam for molesting children - completing a four-day odyssey that covered thousands of miles and filled pages of newsprint. 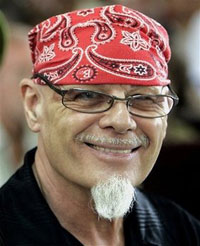 Gary Glitter returns to Britain after molesting children in Vietnam

London seemed to be the last place Glitter wanted to be, but his native country was also apparently his only choice. After being released from a Vietnamese prison Tuesday, Glitter headed first to Thailand, where he was told he was not welcome. He then tried Hong Kong with the same result, and was sent back to Bangkok.

The Thais hadn't changed their minds. By Thursday, airlines and authorities alike appeared to be running out of patience with his travel whims and dispatched him to London's Heathrow Airport.

He emerged from this last flight looking pretty much the same as he'd begun his first: Glitter still wore a white T-shirt, glasses and a baseball cap. The checked scarf he had tucked around his face in order to prevent photographers from getting a good shot was this time wrapped casually around his neck.

At Heathrow, Glitter was whisked through immigration. Photographers gathered at a nearby courthouse to see if he would attend a court hearing that would begin the formal process of placing him on Britain's sex offenders registry.

The 64-year-old Glitter, whose real name is Paul Francis Gadd, was convicted in Vietnam in 2006 of committing "obscene acts with children" - offenses involving girls aged 10 and 11. He had a previous conviction in Britain for possessing child pornography.

Glitter's fall from grace began in 1997, when he took his computer to a repair shop and an employee there discovered he had downloaded thousands of pornographic images of children. Two years later, British authorities convicted him of possession of child pornography, and Glitter served half of a four-month jail term.

In 2002, he was traced to Cambodia, a gathering point for pedophiles, who take advantage of weak and corrupt law enforcement systems and endemic poverty.

He lived there for about six months before flummoxed Cambodian officials learned from the British press who he was. Some Cambodians, unhappy with their country's reputation as a haven for sex abusers, pressured to have him kicked out, which he eventually was that year on the vague grounds that he "had violated Cambodian laws."

In November 2005, Vietnamese police launched a criminal investigation against him for alleged lewd acts with a minor.

Neighbors in the sleepy resort town of Vung Tau said they often saw him bring girls to his home - a terra-cotta-tiled villa with a swimming pool and view of the ocean. At least five girls gave statements to police about their sexual involvement with Glitter, who denied the allegations.

In March 2006, Glitter was found guilty of committing obscene acts.

During his time in prison in Vietnam, Glitter had talked about reviving his musical career. But since he was released Tuesday, he has spent considerable time in airport lounges, not concert halls. No one has heard him so much as hum his best known hit, "Rock and Roll (Part 1&2)."