Malaysia on Tuesday canceled a concert by Canadian rock singer Avril Lavigne, saying it may taint the Muslim-majority country's independence day celebrations after the Islamic opposition slammed her show as being "too sexy." 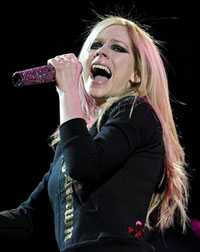 The Arts, Culture and Heritage Ministry said it had decided not to permit Lavigne's show because it was unsuitable to Malaysian culture and could not be held on Aug. 29, two days ahead of independence day.

"It is not timely. It's not in the good spirit of our National Day. If we go ahead with the concert, it is contrary to what we are preparing for," said Shukran Ibrahim, a senior official from the culture ministry's department that vets all foreign artists.

The decision came after the youth wing of a fundamentalist opposition party, the Pan-Malaysian Islamic Party, called for the show's cancellation.

Kamarulzaman Mohamed, a party youth official, told The Associated Press on Monday that Lavigne's show was "considered too sexy for us" and would promote the wrong values just before independence day.

"We don't want our people, our teenagers, influenced by their performance. We want clean artists, artists that are good role models," he said.

Lavigne, who became famous with her 2002 debut album "Let's Go," had planned to launch her monthlong Asia tour in Kuala Lumpur.

The show's promoter, Galaxy Group, can request a new date for the concert, which will be considered by the ministry, Shukran said. Galaxy officials couldn't be immediately reached for comment.

Galaxy began advertising the Grammy-nominated rock singer's concert this month even though it had yet to obtain a government permit, which is mandatory for all foreign music shows. It said Monday about half the concert tickets had been sold.

Last year, R&B singer Beyonce moved her show from Malaysia to Indonesia, and Christina Aguilera skipped the country on an Asian tour after a controversy erupted over a dress code for foreign artists.

Malaysia requires all performers to wear clothes without obscene or drug-related images and be covered from the chest to the knees. They must also refrain from jumping, shouting, hugging and kissing on stage.

Still, members of PAS and other conservative Muslims often protest against Western and even Malaysian music shows that they deem to be inappropriate.

The local organizer of a Pussycat Dolls concert in 2006 was fined 10,000 ringgit (US$2,857) after the U.S. girl group was accused of flouting decency regulations.