Rock pioneer Iggy Pop and his band the Stooges have lost their gear after their rental truck was stolen after a concert in Montreal. 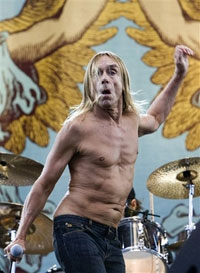 Stooges road manager Eric Fischer says the 15-foot (4.57-meter) truck that was stolen Monday contained the group's instruments and stage gear. He tells the Detroit Free Press that the lost items are worth tens of thousands of dollars.

The Stooges are in the middle of a tour with stops in Belgium, Britain, Canada, the Czech Republic, Finland, France, Germany, Ireland, Italy, Norway, Russia, Serbia, Spain and the U.S.

Pop is considered widely influential in the development of punk and heavy metal rock.

The 61-year-old was born in Muskegon, Michigan, and began his music career in the Detroit area.

Although he has had only limited commercial success, Iggy Pop is considered an innovator of punk rock, garage rock, and other related styles. He is sometimes referred to by the nicknames "the Godfather of Punk" and "the Rock Iguana", and is widely acknowledged as one of the most dynamic stage performers. Pop began calling himself Iggy after his first band in high school, The Iguanas. His direct influence extends to the present day: a Cadillac ad in rotation since February 2007 features his vocal performance on the song "Punkrocker", recorded in 2006 with the Swedish band Teddybears.

Iggy Pop was the lead singer of The Stooges, a late 1960s/early 1970s garage rock band who were influential in the development of the nascent heavy metal and punk rock genres. The Stooges became infamous for their live performances, during which it was not uncommon for Pop (who traditionally performs bare-chested) to consume narcotics, self-mutilate, verbally abuse the audience, expose himself and leap off the stage (thus being among the first to "stage dive"). Countless subsequent performers have imitated Pop's antics.

Pop has had varying degrees of success in the course of his subsequent solo career. His best-known solo songs include "Lust for Life", "I'm Bored", "Real Wild Child", the Top 40 hit "Candy" (with vocalist Kate Pierson of The B-52's) and "The Passenger". A film about Iggy Pop's life and career titled The Passenger is currently in development.