German man who touched popemobile in 2007 ordered to undergo treatment

A court has ordered a German man who jumped a security barrier and grabbed hold of Pope Benedict XVI's popemobile last year to undergo treatment, but stopped short of sending him to a psychiatric hospital. 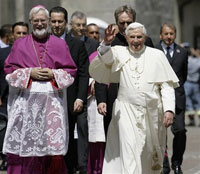 German man who touched popemobile in 2007 ordered to undergo treatment

The 28-year-old, who was not identified, was swiftly tackled and pinned to the ground by security guards trailing the popemobile in the Vatican's St. Peter's Square on June 6 last year.

On Monday, the Waldshut-Tiengen state court in southwestern Germany put the man, who suffers from a bipolar disorder, on four years' probation.

To avoid the man from being sent to a psychiatric hospital during that period, the court ruled that he must begin psychotherapeutic treatment and continue with medication he is already taking, undergoing regular check-ups.

He also was banned "categorically" from consuming alcohol and drugs and was ordered to undergo regular urine tests, the court said in a statement late Monday.

It said the man's health has "stabilized significantly" over the year since the incident, and that the conditions attached to Monday's verdict should encourage a further improvement.

The German-born pontiff was not harmed in last year's incident and appeared not to have even noticed. He did not look back and kept on waving and blessing the crowd.