Israeli airport police say a local couple embarked on an unlikely European vacation - remembering their duty free shopping and their 18 suitcases but forgetting their three-year-old daughter at the airport. 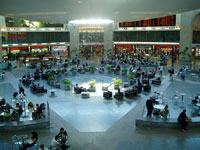 The couple and their five children were late for their flight to Paris Sunday and made a mad dash to the gate. In the confusion, their daughter got lost. A policeman found her wandering around the terminal, crying for her mother.

Israeli media Monday reported that the ultra-Orthodox Jewish parents, whose names were not released, didn't notice the child was missing until they were told, in the air, that she had been found at Ben-Gurion airport. The child, accompanied by an airline staffer took the next flight to Paris where she was safely reunited with her parents.