Prince William will visit British special forces and serve at military headquarters as part of a plan to have him experience all branches of the country's armed forces, royal officials said Thursday. 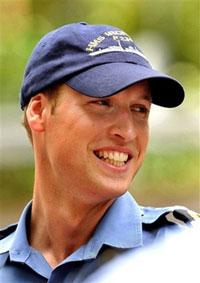 William, 26, will work with the Defense Ministry in London this autumn, pay "non-operational" visits to special forces troops and serve briefly with the Army Air Corps, the prince's office said.

William is due to complete a two-month stint with the Royal Navy on Friday. Most of the tour was spent aboard the warship HMS Iron Duke on anti-drug and disaster-relief duties in the Atlantic and Caribbean.

The prince is already a junior officer in the army and also earned his wings in the Royal Air Force, helping to pilot a transport plane on a flight to southern Afghanistan.

Britain's monarch is the titular head of the country's armed forces, and William is second in line to the throne behind his father, Prince Charles.